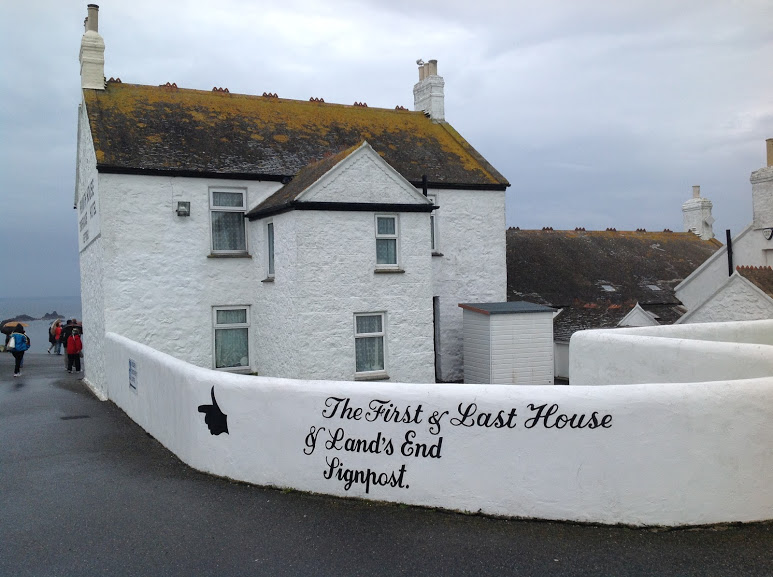 Lands End to John O’Groats in a car

First day of our LEJOG trip. Left home, went back to check if I have locked the house. On route to St Ives.  Jet set go!!!

Coffee break at a town called Bridport. The cafe looks more like a cafe of US small town, with black and white photos of Elvis, Marilyn , Elizabeth Taylor, an old juke box, pool table. It looked a lot like a cafe from a Hollywood horror/murder movie. The lady serving at the counter was disinterested when we were ordering coffee. In the large cafe only one table was occupied and it smelt so musty. Anyways we did not get attacked by zombies or stabbed or no vampires bit us.  We had our latte and are on our way to St Ives. Skipped going to St Ives and went straight to Camborne to hotel. Had a nice warm meal with a glass of Rosé to wash it all down.

Starting from Camborne to lands end via St Ives scenic route. Stopped enroute at a open space part of National trust countryside open spaces to soak in the atmosphere, went for a short walk up a small hill scattered all over with blue bells. All i could heard was wind rustling, occasional cars rushing past and birds chirping.The road side was bursting with colors, blue bells,fox gloves, garlic parsley flowers, and lush green of grass. At Land’s End, sending a postcard to myself. Our trip truly starts now…

Lunch break at services in Exeter. Now heading to Wales to a literary festival at Hay on Wye. Looking forward to it, have never been to a literature festival. Secretly wishing will get a chance to meet Stephen Fry and get his autograph.
Crossed the Severn bridge in to Wales. Mesmerised by beautiful landscape rolling hills, meadows filled with buttercups and daisies.

Reached Hay on Wye around 5 PM. Very excited to experience a literary festival. Hay on Wye is known for its book stores and antique books, a must see for any book enthusiast. Since most of the book stores were closed, we added the town on our list of must visit again list on its own. My first literary festival experience was great although did not go in to any of the events may be next time. Went in to the festival shop, bought a few books, went to the coffee shop, sat by the tent sipping the coffee and drinking in the atmosphere and did nt meet Stephen Fry!!!
Went to our hotel In a town called Llandod. Our stay was in a place called Hampton hotels. Do not be fooled by the name, very basic, appropriate experience for a road trip, with a noisy pub in the ground floor with screaming youngsters.

Started our day with a breakfast. Full English breakfast being made and served by a restaurant run by a Chinese. Had a chat with him, and learnt he was from Glasgow.  Leaving now for Snowdonia. Stopped over at a scenic spot to savour the nature, with sheep bleating, wind rustling in your hair, water from river Severn also called Sabrina, lapping on the stones, I could spend hours together gazing in to vast rolling mountains, but had to head on our trip.

After a coffee break, at a beautiful pub enroute. We drove through a slate mining town, where the town is interspersed with slate slab mountains.  We drove into Betws-y-coed.It’s here we walked towards the Swallow waterfall, the tallest water fall in Wales. The Swallow  roars and gushes around the rocks and boulders dancing wildly runs and turns into gentle River Conwy.
Had lunch and then went to see the Bodnant garden,Conwy. It’s known for its Laburnum Arch, which blooms in end of May. Lightly scented yellow flowers forming a canopy is beautiful beyond words. Extremely happy to have made the trip during laburnum bloom. 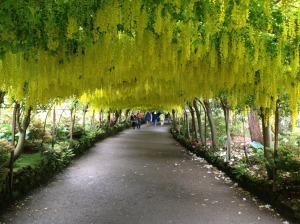 We took a break in the evening, checked in to our hotel in Llandudno, a Victorian Welsh town, known for its scenic coast and tram way.  In the evening drove through the scenic coast line of Marine Drive, in Wales ,not Mumbai!!. The drive is beautiful, on one side rugged rocky terrain and on the other serene blue  Irish sea glistening in summer sun. We drove from Llandudno through Marine drive and came into Conwy. Everything is painted orange in the twilight sun. The day ended with an Indian takeaway to our room in a Victorian Hotel. Now back to the room for a good night s rest. Looking forward to tomorrow. 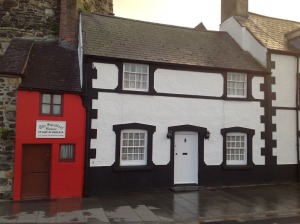 After a hearty breakfast we are on our way to bonnie land of Scotland. Skipped going into Lake District, since we will be visiting with friends in August.

Today has been more just a driving day with not much of site seeing. The only stopover  being at Hadrian s Wall. We walked around a bit in Housesteads fort.

Now on our way to Scotland, looking forward to our stay at Brambles,Inveraray. Have read some great reviews on Trip advisor. This will be our second visit to Inveraray. Stopped over at 16:30 for a late lunch of pizza and on our to Inveraray. Already into Scotland. It’s an amazing experience to watch landscape changing,gazing out of the car window. Coastlines rolling into meadows, rolling meadows disappearing in to gentle hills and then hilly terrain  suddenly running wild and turning into  rugged mountainous terrain. Awaiting the Scottish highlands with anticipation. I am reminded of an Old Bollywood song called yeh kaun chitrakar hai!!!

The drive to Inveraray is very mesmerising , majestic mighty mountains covered with  tall and closely lined coniferous trees. Inveraray is picturesque small serene town, tucked away in the banks of Loch Fyne. Since we had a late lunch we skipped dinner, we had a relaxing evening, had a nice warm bath and ended the day with some Would I Lie to you on tele!!!.

The bed in Brambles is nice and warm, despite the noise of cars on road managed to sleep well. Had a scrumptious breakfast at Brambles,went for a stroll around. Brambles and Inveraray on my list of places to visit again.

Now on our way to the via duct where the train sequence of Harry potter and chamber of secret was shot.
Before that we went in to the town Oban. Had a walk around and decided to have a early lunch. The next stop was Glen Coe, it’s known for its outstanding landscape of mountains, wildlife and trees. It also is known for. Ben Nevis, the tallest Mountain peak in UK.
We walked around a bit in Glen Coe, but did not stay much long as other destinations beckoned us.
Next stop was glen finnan, where there is a Jacobian monument in memory of Prince Charles. We climbed up the monument and had a view of the Loch.

After that we walked to the Glen Finnan via duct which has 22 arches and appeared in the Harry Potter Film.
After that we decided we will go to the hotel. The hotel is in Invergarry, the hotel is called Glengarry Castle. It’s an old castle converted to Hotel. I am absolutely loving it. And has huge estate to walk around filled with trees and Rhododendrons, Azaleas.  It has a huge library with large windows with views in to the Loch and mountains. Imagine sitting by the window and reading a book. That’s what I am doing tomorrow. We had dinner at the castle restaurant and then strolled around in the gardens for a while.

We decided we will spend the day leisurely. We woke up late and had our breakfast leisurely, spent some time lazing around in room, quickly disappearing in to a land of sleep. Around Mid day we decided to go for a drive to a near by castle called Eileen Donan castle, which has featured as Northern base of MI6 in James Bond movies.

It’s claim to fame in India is it is one the castles in title song of Kuch Kuch Hota hai. It’s also considered as the most romantic castle in Scotland. Personally I don t thinks so!!! After that we went back to hotel and had the traditional tea in the lounge. We were served carrot cakes, scones,cream and jam. I had mine with coffee, no surprises. Sitting by the window watching the world pass by slowly, sipping a coffee, wish I could do this more often.  After that  we had a walk with in the estate.
The day ended with a cruise on Loch Ness and in search of Nessie. But no luck with finding Nessie!!!!

Hurrah it is the seventh day and will be heading in to John O groats today. Had our breakfast, packed our bags and checked out of the hotel with a note to myself, to come back, too many on list now. Now on our way to John O Groats. There are several roads lined with tall coniferous trees with homes, which reminded me of walk to and from from my house in Srinagar,
15:10 arrived at John O Groats  Every year around 3000 people do the LEJOG trip, this year we are one of those people.