Beautiful Bergen with its colourful wooden houses, vast emerald green coastline, mountains and fjords, made me fall in love with it instantly. It is often called the Gateway to Fjords , it is the second largest city of Norway, is also the European city of culture. It is surrounded by seven mountains and hence is sometimes referred as a city between mountains.

In spite of being the second largest city in Norway, the city has a unique but conspicuous charm of a smaller town, a laid back quality of an time gone by, yet possessed with all the modern conformities sans the delirious and frenzied rush of a crowded big city. I absolutely fell in love with Bergen. The city is surrounded by scenic fjords and mountains, has pretty little alleyways perfect to explore on foot. It has plenty to offer, from night life, fjord cruises, scenic train rides, to gastronomic adventures and adventure sports. I am sharing in this post some of my memorable experiences of Bergen.

Bryggen is the old wharf of Bergen, part of the old Medieval past of Bergen, and now a UNESCO heritage site. Bryggen is a collection of colourful wooden buildings, made using vernacular building techniques. These were originally built as trading posts with merchant houses, and warehouses for storing goods.It has been destroyed several times by fires and rebuilt again. The last fire was in 1955, and the buildings have been rebuilt as per the vernacular building techniques of 1700s. The buildings now are used to house Art and crafts businesses, and Christmas memorabilia. It’s never too early to buy a few more decorations and ornaments. The wooded houses of Bryggen and it’s narrow alleyways are very famous with the tourists and have plenty of shops and restaurants around. It is also not very far from the famous Fish market of the city. I enjoyed Bryggen, walking around the alleyways , going up the narrow stairs and buying some Christmas ornaments. And later on ended up having a lazy lunch at an Italian restaurant in Zachariasbryggen called Olivia, where the chef rustled up a delicious penne pasta with roasted vegetables and red pesto off the menu for me. Being a vegetarian and a fussy eater, I often am a challenging customer, but was delighted with their pasta. And they also serve the most delicious pistachios ice cream. It is indeed true that good food and good company always puts one in a good mood.

Bergen is also known as the Gateway to Fjords. It is situated between two beautiful fjords, the Sognefjord and the Hardangerfjord. The fjords around Bergen are part of UNESCO heritage list. There are several cruises offered ranging from a whole day to more than a day cruise of the fjords, which begin at Bergen. We decided on a smaller route, which is a round trip to Modalen. It starts at the downtown Bergen, through the Mostraumen straight to Modalen and back to Bergen. It takes around three hours for the entire trip. I enjoyed the cruise very much with its spectacular scenery.It passes through the colourful Bryggen, on to the Fjords,passing through narrow tidal rivers surrounded by mighty mountains rising out of the water with cascading waterfalls, beautiful villages and farm houses looking precariously perched upon cliff tops. The boat passes through the old Viking country, with the view of the Old Hamre Church which was built in 1024 by vikings.The boat slows down near the church to get a closer look and for taking photos. The boat also stops near waterfalls to get a closer look at the falls and feel the spray of the icy cold water. We were lucky the day was a bright and sunny day, but yet when the boat was speeding across on the fjords, there was a blast of cold wind rising from the fjords and it was freezing cold standing on the top deck of the boat. We had to sneak in a couple of times downstairs where it was indoors and warmer. The views from the top deck are breathtaking, but I would highly recommend wrapping up yourself warm for standing there, even with that you would feel the windchill when the boat is speeding across and knock your breath out. If you want to sit indoors I would say go slightly early and grab a window seat. I loved the top deck for its spectacular views, the cold wind stinging my face, at some point I could not feel my ears, but it was an exhilarating experience. My favourite part of the view was Modalen, a small village at the end of the fjord in Modalen. It even has a Mobryggen which looks like Bryggen, but a smaller version. Tiny colourful wooden houses, casting beautiful reflections on the water. It s a sight to behold.

We were so taken by the landscape of this Norwegian city, that we wanted to experience more of its brilliant sights . My husband had been wanting to try out driving in Europe for a while, he just thought this was his best opportunity to do that. He hired a car for a day and I found an off beaten track on visitbergen.com s website. The next day we went exploring the track, where one of my major task was to keep reminding my husband, “ Stick to the right, Stick to the right” given he has always driven in UK and in India. The drive was spectacular, it was indeed an offbeaten track, taking us through tunnels, running along the Sognefjord, surrounded by majestic mountains. The drive was from Bergen to Mo( Modalen is referred as Mo), Mo to Matre to Bjordal, to Oppedal and back to Matre to Bergen. The route a sort of a loop and brings you back to Bergen. We stopped over at Mo to sit by the Tidal river, listening to the cascading waterfalls, enjoying a cup of coffee and some biscuits. The digestive biscuits with the coffee tasted the best on that day. The serene fjords and the majestic mountains were simply divine. The track runs most of the route along the Sognefjord, and often takes you through desolate but beautiful roads. Bjordal is a hidden gem of this off beaten track, with it absolutely stunning views and tranquil surroundings left me spellbound.

Another memorable experience of Bergen, was going to Mt Fløyen. Mt Fløyen is a forested area, with hiking, cycling trails and a electric funicular taking you to the top of Mountain. There is also a cafe’, souvenir shop and restaurant at the top. And a viewing platform which gives a fantastic view of Bergen city, the fjords and mountains. We took the Fløibanen funicular from Bergen city centre, near the fish market, to the top of Fløyen. It takes around 6 to 8 minutes to reach the top. The views from the top are spectacular. We walked back down instead of the funicular. The winding path down the lets you explore the pretty little alleyways and streets with beautiful wooden houses, cafes and shops. We had been lucky with the weather, to have had bright and sunny days most of the time. Bergen is known for its fjords, and scenic beauty and also for its rains. It is called “City of Rains”. It is said it rains 240 days on an average here every year, given its location surrounded by mountains, the mountains trap the clouds. I am someone who loves rains, perhaps because I was born and raised in India, where people wait in anticipation for monsoon, a season of rains. Years ago when we were considering moving to London, I was a bit sceptical of the change ; moving to a new city, a whole new country and culture, making new friends, is that what I really want ?. A friend, in her efforts of trying to offer me an objective view, wisely pointed out change is always good and more importantly may be I belonged in London, because of my love of rains , as it rained practically in every season in London. London did eventually win me over, the grey clouds and rains do add a dash of charm over the ye olde London for me. One of the days during our stay in Bergen, when it was raining, I thought it would be a fantastic experience to go up to Mt Fløyen on the Funicular, the carriage cutting through the mist and clouds, listening to the rain fall on ceiling and watch it making beautiful patterns on the glass ceiling and windows. So we went one rainy dusk to Mt Fløyen and it was one the most incredible experiences of the trip. The mist and dusk falling over the city, painting the surroundings in a warm romantic glow, making the views ahead resplendent. I have always found mist magical and romantic, like something confounding suspended in the air, a magical even ready to unfold. It is a sweet sensation of anticipation and mystery. The views from the top were spectacular, with dusk falling over the city and fjords, like an orange veil slowly unfolding over the fjords, tip toeing towards the city, the lights below in the city, twinkling like little stars on earth. That experience will stay with me forever.

Bergen is an enticing beauty, which won me over with it charming sights, astounding natural surroundings, off-beaten trails.All the wonderful times and experiences I shared in the city ,will remain with me forever. It feels like I am taking a little part of Bergen with me.

Anita Desai “ Wherever you go becomes a part of you somehow” 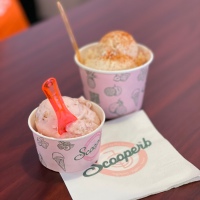 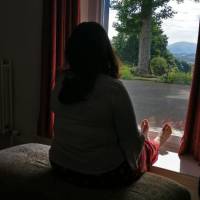