I had been toying with the idea of a journey to the temple Towns of Tamil Nadu for a while. In March 2016 when, the trip materialised and although I did not intend it to  be one, the trip turned out to be  a soul searching trip. A trip to find meaning and purpose of life, a little walk down the memory lane and finding what God and spirituality mean to me. I suppose there was a part of me which wanted to reconnect to my roots, listen again to the stories and legend which I heard as a child. Where best to start  than  the temples- symbols and iconography I have grown  up with. I am neither an expert on Temples, spirituality, Hinduism or Gods nor am I a historian. To find true meaning of God, I am not so sure, Temples are a prerequisite. I regard temples as a places of worship built by kings and queens to leave their  mark, and are cultural, historical and religious heritages. After all, Buddha found enlightenment under a tree and Swami Vivekanda on a rock by the sea side. I am merely a tourist, an observer, who is on a journey, taking a  little vacation from chasing ambitions, a journey of finding myself and inspire a  few others.

During my trip I visited several temples, out of which I thought of writing account of three of them today. The three temples located in three different towns, and I visited two on the same day, and the third on another, and not perhaps in the order I have written. The three temples have a link to one another in one form or another.  One of the main Gods in Hinduism is  Lord Vishnu, and who follow Vishnu are called Vaishnavites. All the three are Vaishanvite temples.

On the way to Kumbakonam, there is a temple by the name of Oppiliappan Temple. The legend says God/Lord Vishnu  appeared in the form of an old man and requested to  marry the Sage’s daughter who was very young and raised very affectionately. The sage wanted to dissuade the old man marrying his daughter , said his daughter was very young, very naive ,not well versed with cooking and may forget to add salt, hence would not be an ideal companion/wife. The old man promised the sage that he would eat the food cooked by his daughter, even if the food cooked did not have salt and was determined to marry his daughter and take care of her. The sage upon realising the old man is God and agreed to marry his daughter off to God. Hence the offerings for God,referred to  as neivadeiyam, is always cooked without salt in the said temple. The deity hence acquired the name Uppliappan,- Upp in Tamil means salt. The name when  written in Tamil reads as Oppilliappan, Opp means equal Ila means None,  the whole word when translated means ‘the one who cannot be equated’. But for some reason, he is more commonly referred as Uppilliappan and the word has it that if you eat the Neivediyam/offering inside the temple even though offering is salt less, one does not feel it is without salt. And if you step out of the temple , the same offering tastes salt less. I am a true believer of ” Kaadu aala ketpadum poyi,kaannu aala parpadum poyi, theera veesaripathea meyi”. If loosely  translated from Tamil means All that you hear is a lie, all that you see is a lie, only that which is thoroughly investigated is true.  Naturally I wanted to experience  the  legend and ascertain for myself if its true. We arrived at the temple, when the evening prayers were underway. The temple itself is very beautiful and very well kept. It s a Vaishanavite temple, and usually Lord Vishnu is described as ‘Alangarapriya’ the one who loves adornment, unlike Stoic Shiva. The deity is always adorned with flowers, jewellery and accessoriess. Once the prayers are done, one can go near the deity in the inner sanctum and pray  quietly, a quiet contemplation. I love that quiet contemplation, not in all temples is it possible to have a moment of quiet, as usually  is the case in big and famous temples, they have a huge turnout of crowd(imagine Wembley Stadium in London on a day of football match) and to manage the crowd is a humungous task, there are time limits imposed, different  serpentine queues, there is hustle and bustle of people, chattering going on everywhere, people stealing a glance at their phones, murmuring may the prayers get over in time so they can catch the bus or go home, etc,  but yet that evening  we had an opportunity  for a quiet contemplation in the inner sanctum. In that moment of contemplation, I completely forgot about Neivadhyam. It is only, when we came out of the temple and were about to leave, I turned to my hubby and said’ Oh we did not try the offering’. My hubby volunteered to go in and taste the offering and get some for me too. So I can eat outside the temple and he inside the temple. I waited in much anticipation, my hubby came out and said’ It is so delicious’ and when I tried, it indeed was very delicious. It was a sweet dish called Sakkarai Pongal, a porridge made of Jaggery( a form of unrefined sugar very commonly available in India) and rice!!! 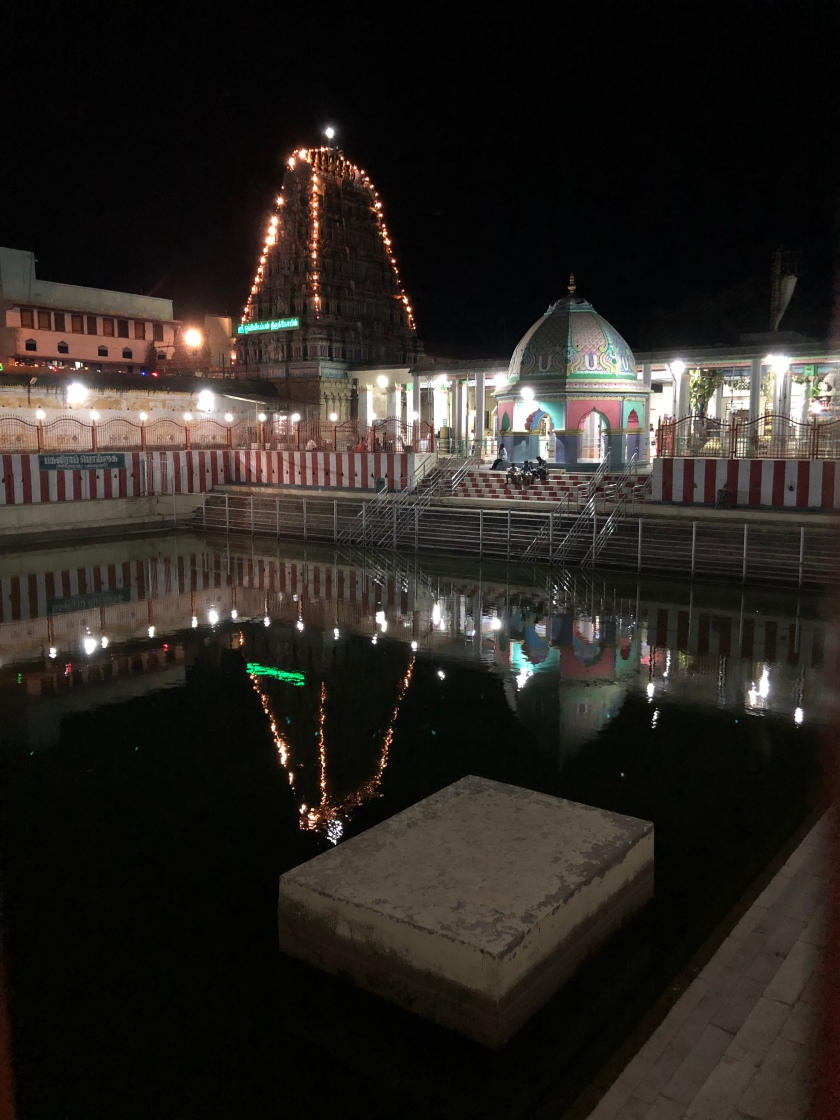 When we started our trip from Madurai, I wanted to go to a temple called Srivilliputhur. The town is known for its Temple, the Gopuram/tower of the Temple is the symbol of Tamil Nadu Government and the town is famous for a desert made of Milk and sugar called Palkoa, which is condensed sweetened milk, infused with cardamom. Its my favourite and my mother is an expert in making it.  Srivilliputhur temple is a Lord Vishnu Temple, deity version is  Anantasainam, sleeping posture, where as Oppilliappan, deity is   a standing version. The temple is also famous for Tamil Saint Poetess, Andal, who was found as a baby, by the priest of the temple, who on his own was a very famous saint. He raised the baby as his own child. The girl was totally devoted to God and on growing up wanted to marry Lord Vishnu and legend has it that she did marry God.  There are historical records of the poems  having been  written by her and records of her presence, but the era could not be determined with precision, it is determined to be somewhere between 8th and 9th century. The fascinating fact, I find is both temples have the common legend of a saint/sage giving his daughter off in wedding to Lord Vishnu/God. Leaving  aside the legend of marrying God, historically Andal indeed is famous for  Bhakti Yoga movement, where one finds enlightenment through devotion/bhakti. 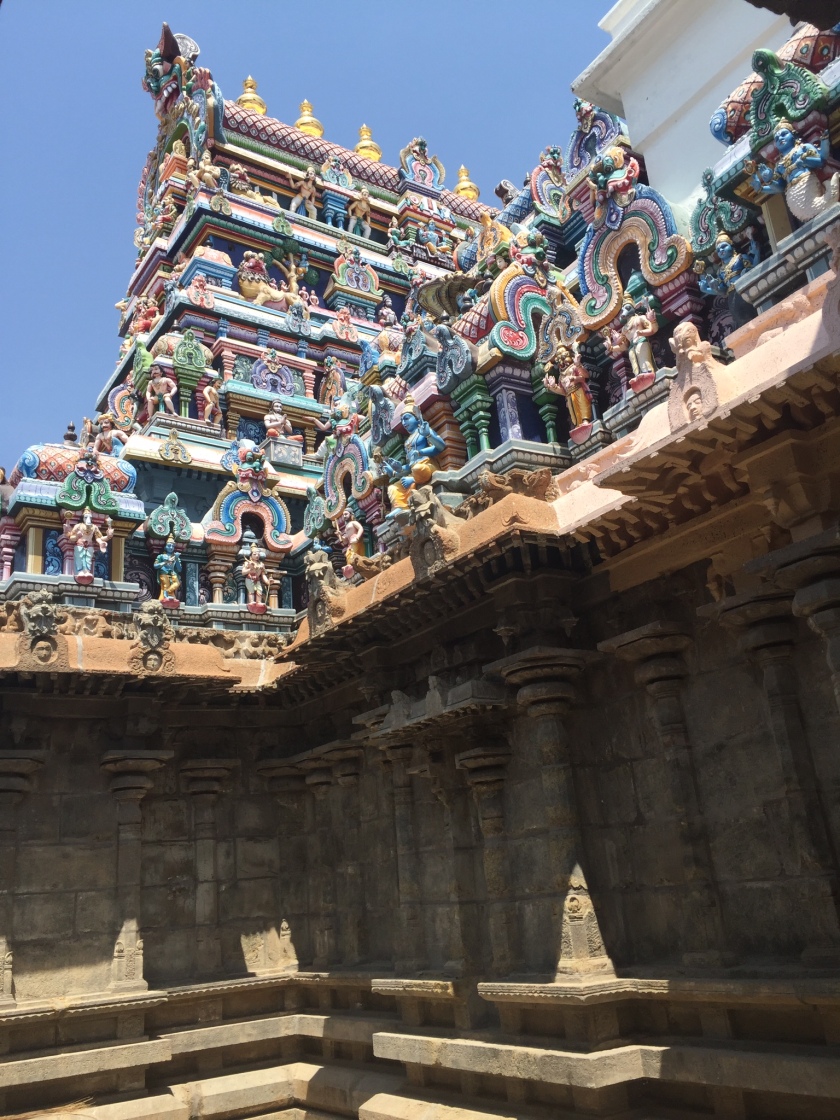 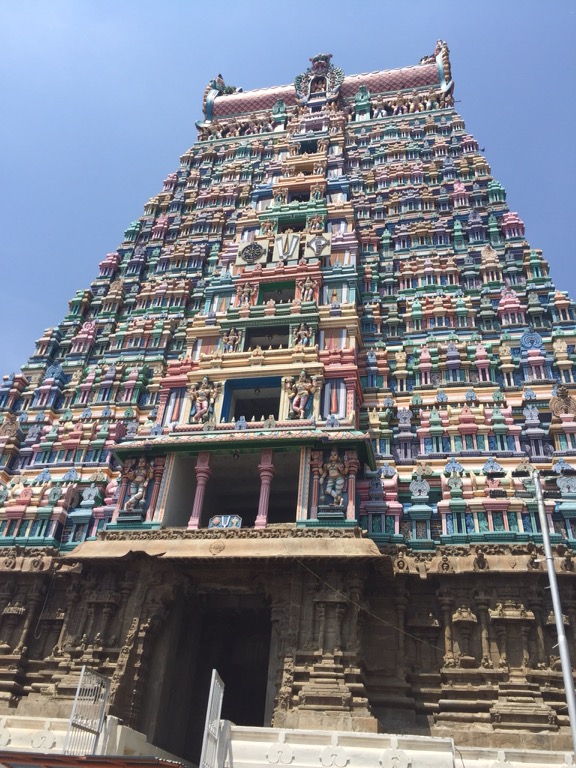 The driver, who was taking us around the  trip, mentioned since we went to Srivilliputhur, we should visit  Srirangam, where the famous Ranganathan Temple is situated.As the legend goes by, Andal was married to Lord Vishnu/God in the Ranganathan Temple. Since it was not a big detour and in the spirit of the journey, we visited Srirangam. Srirangam and Trichy are twin cities separated by the Riven Kaveri and there is a bridge running on the River Kaveri connecting the two cities. The town of Srirangam is surrounded by water/River and is an Island. The River Kaveri on one side and River Kollidam, distributary of Kaveri on the other.The temple when we visited was under a massive facelift. The temple complex is huge and has numerous Gopurams/Towers, and our driver informed us that it is the largest temple complex in India. The main deity in here is Lord Vishnu in Anantasainam version, though there are other shrines too for other deities’. The temple has beautiful sculptures and huge complex with stories and inscriptions, massive pillars with beautifully carved stone and halls. The complex and temple are an extraordinary sight.

All the three temples were pivotal to the economy of the towns, the temple generated huge amount of business and livelihoods  around the temple, which is the case even now. There are throngs  of visitors and devotees  each day to the temple, which is vital to the economy of the town. Each temple I visited during this trip had  number of legends and stories associated , which have been passed on from one generation to the other for centuries via word of mouth and perhaps sometimes through written accounts. The stories and legend sometimes intermingle and create new ones. Wars have been fought over these legends and temple . I believe  the stories and legends were  intertwined with facts, with a little bit artistic freedom like Legendary Robinhood. How do you tell a common man to do good just for the sake of doing good, how do you tell a Man he is capable of extraordinary fete in his ordinary life, how do you remind him, he has the inherent ability to do the right thing, so a tale had to be told, to teach morals and principles, .  I sometimes wonder the morals or the intentions behind these stories and legend were lost in time or have become defunct for the current age. But yet the stories and legends live on, having lost its meaning.

17 thoughts on “Temple Towns of Tamil Nadu- Srirangam,Srivilliputhur and OppilliAppan” 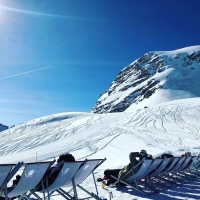